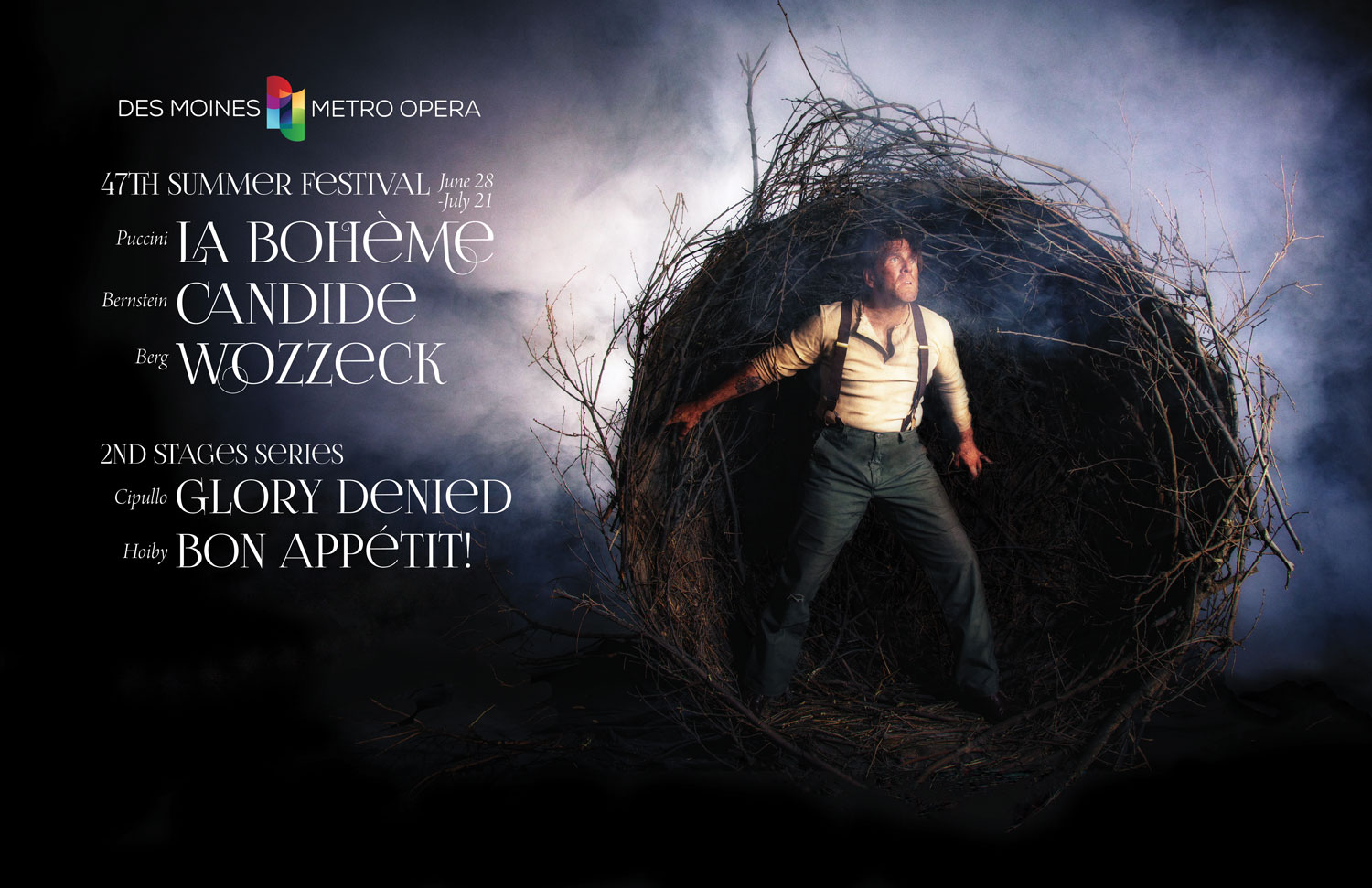 “Our 2019 season features a bold and exciting combination of titles both familiar and new,” said Egel. “Building upon the power of sung stories as they can only be told in Des Moines Metro Opera’s unique playing space, the contrast between the works we have selected is compelling, powerful and thrilling.” For the 47th Summer Festival, La Bohème, Candide and Wozzeck will be presented for 15 performances between June 28 and July 21, 2019, at the Blank Performing Arts Center in Indianola, IA. Glory Denied will be presented November 16-18, 2018, at the Freedom Hall at Camp Dodge in Johnston, Iowa. Bon Appétit! will be presented for two performances in July 2019 at the Iowa Culinary Institute.

Giacomo Puccini’s La Bohème may be the world’s most popular opera. Join the bohemian revolution in the heart of Paris as a group of struggling artists strives to create beautiful art, find love and ultimately live life to the fullest in this romantic operatic blockbuster, which features some of the most familiar and beautiful music ever written. Soprano Julie Adams makes her DMMO debut as Mimì in this revival of DMMO’s celebrated 2011 production. DMMO Principal Conductor and Music Director David Neely will lead the production.

Sparkling with wit and humour, Candide is part opera, part musical and entirely irreverent, drawing on everything from European operetta to Latin American dance rhythms to the Spanish Inquisition. Bernstein’s score abounds with spectacular music, including a famous overture, the soprano showpiece “Glitter and Be Gay,” and the soaring finale, “Make Our Garden Grow.” We follow our hero, Candide, and his sweetheart, Cunégonde, as they journey through a mad and chaotic world populated by a seemingly endless cast of vicious, greedy, lustful and manipulative characters. Soprano Deanna Breiwick, who was last seen at DMMO as Nannetta in 2016’s Fastaff, returns to sing the role of Cunegonde. Tenor Jonathan Johnson will be making his DMMO debut as the titular character. Michael Shell will make his DMMO debut as the stage director for the production.

Who’s afraid of Wozzeck? The quintessential “modern” opera, the one that changed everything, still hasn’t lost its bite. Alban Berg’s masterpiece combines music of intense emotional power and lyricism with a profoundly dramatic story. Berated by his captain and betrayed by his mistress, Wozzeck tries to make sense of his fragmented, dreamlike existence with disastrous results. More than 90 years after its premiere, Wozzeck still sounds dramatically modern. But the style that shocked listeners in 1925 sounds seamlessly natural today, so perfectly suited to character and incident that the drama and its soundtrack unfold together with utter clarity. Michael Mayes sings his first Wozzeck in a new production led by Music Director and Principal Conductor David Neely and Stage Director Kristine McIntyre.

The new season will also continue the company’s popular 2nd Stages Series, another part of Egel’s new vision for the organization. Now entering its fifth year, this series is an initiative designed to present operas in non-traditional spaces in Des Moines proper. As part of the 2nd Stages Series, the company will present Tom Cipullo’s chamber opera, Glory Denied, for three performances in November of 2018, and Lee Hoiby’s Bon Appétit! for two performances in mid-July 2019.

Presented as a part of Des Moines Metro Opera’s 2nd Stages Series, Glory Denied is the story of an American family during the turbulent Vietnam War era. America’s longest-held prisoner of war returns home to a country he no longer recognizes. This intimate chamber opera chronicles Colonel Jim Thompson’s suffering in the jungles of southeast Asia through to the personal struggles that followed his liberation and repatriation. Glory Denied will feature the returns of baritone Michael Mayes, conductor David Neely and stage director Kristine McIntyre. Tickets available beginning September 3, 2018.

"Like [Julia] Child's whipped egg whites, Bon Appetit! may be light and frothy, but it's the result of a master's sure touch...Hoiby's writing for voice and orchestra moves with surprising ease between urban swagger and country languor." (Opera News)

The productions of La Bohème, Candide and Wozzeck will be performed in rotating repertory in the intimate 467-seat Pote Theatre at the Blank Performing Arts Center in Indianola, Iowa. Glory Denied will be presented in the Freedom Hall at Camp Dodge in collaboration with the Iowa Army National Guard and Bon Appétit will be performed at the Iowa Culinary Institute. Both productions are part of the Company’s popular 2nd Stages Series, an initiative committed to creating collaborative performances designed to engage new audiences in unique spaces. Each opera features English supertitles projected from two locations above the stage. The Des Moines Metro Opera Festival Orchestra, made up of professional musicians from across the country, will accompany all three mainstage productions. As always, Des Moines Metro Opera will continue to provide free opera previews prior to each performance.

Past subscribers are eligible to renew their Summer Festival Season subscriptions now. Beginning October 15, 2018, new subscriptions will be on sale to the general public. Subscribers can save up to 30% over buying single tickets and have the benefit of reserving their seats before single tickets go on sale. Full production and ticket information will be available by visiting www.desmoinesmetroopera.org after September 1 or by calling Des Moines Metro Opera's box office at (515) 961-6221.