Indianola, IA — Following the cancellation of the 2020 Festival Season, Des Moines Metro Opera and Iowa PBS have formed a unique partnership to bring the opera season into a digital format with online streams and televised broadcasts of four fan-favorite productions. These broadcasts will serve as the centerpiece of the 2020 Virtual Festival and will be supplemented by artist recitals, cast reunions, interviews, prelude talks and more. Starring bass Zachary James, soprano Sara Gartland, soprano Sydney Mancasola, tenor Evan LeRoy Johnson, mezzo Jill Grove, and many more of today’s leading singers, the Virtual Festival runs from June 28 to July 19 and will be available to view on Iowa PBS’s primary channel for Iowa audiences and streaming online for worldwide audiences.

“For the performing arts industry, COVID-19 has challenged a business model focused on gathering people together for collective experiences,” says Michael Egel, General & Artistic Director of Des Moines Metro Opera. “Dark days in March and April made it clear that DMMO could not welcome artists and audiences together to produce a live, in-person festival. To fill this artistic void, our friends at Iowa PBS stepped in with an offer to bring their world-class broadcasts of recent DMMO productions out of the vault and onto the screens of audiences around the globe. What originally looked like a prolonged intermission soon gave way to ‘the show must go on.’ The 2020 Virtual Festival emphasizes our commitment to provide quality theatrical experiences to our community at the same time expanding how we think of that community in global terms.”

The four operas will premiere online simultaneously with the Iowa PBS television broadcast and will be available for on-demand viewing for 45 days. Viewers across the world can tune in on iowapbs.org, the PBS Video App, Facebook and YouTube. The PBS Video App is available on iOS and Android devices, Roku, Samsung Smart TV, Apple TV, Android TV, Amazon Fire TV and Google Chromecast.

For more information about Des Moines Metro Opera, please contact Scott Arens at sarens@dmmo.org or 515-209-3255. Learn more about the Virtual Festival at desmoinesmetroopera.org. 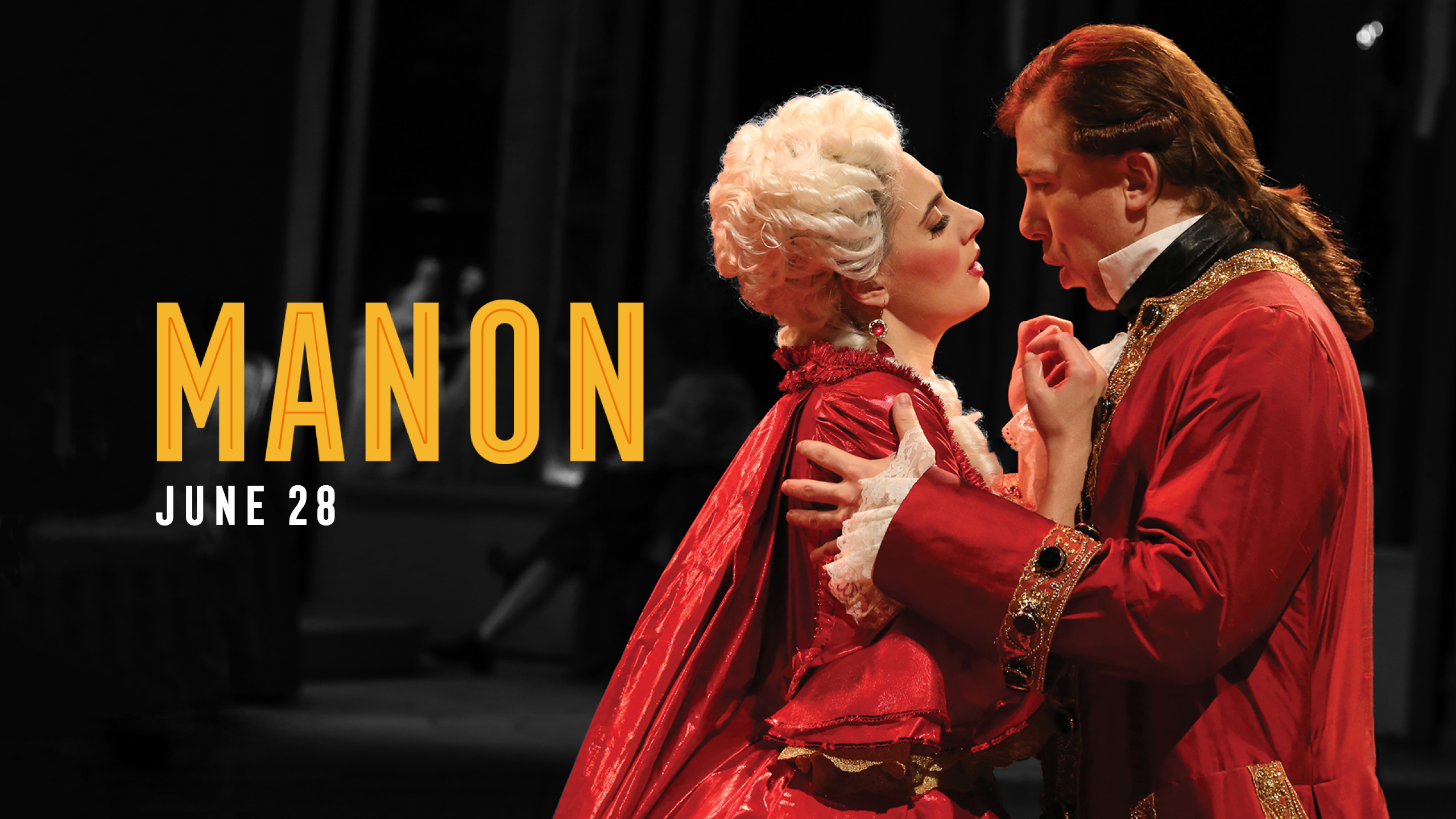 Jules Massenet wrote several stylish, witty, and beautiful operas, but it is Manon for which he is best remembered. The opera tells the story of the impulsive Manon, who falls in love with the young Chevalier des Grieux but also longs for the life of luxury and excitement offered by the rich nobleman de Brétigny. Her choice between young love and the allure of life's temptations is a timeless tale.

In this Upper Midwest Emmy-winning broadcast of our 2016 production, soprano Sydney Mancasola and tenor Joseph Dennis star as the young Manon and Chevalier des Grieux, with baritones Michael Adams and Troy Cook making their DMMO debuts as Lescaut and de Brétigny, respectively. Maestro David Neely conducts, and the production is directed by Kristine McIntyre. Funding for the broadcast of Manon has been provided by Linda and Tom Koehn. 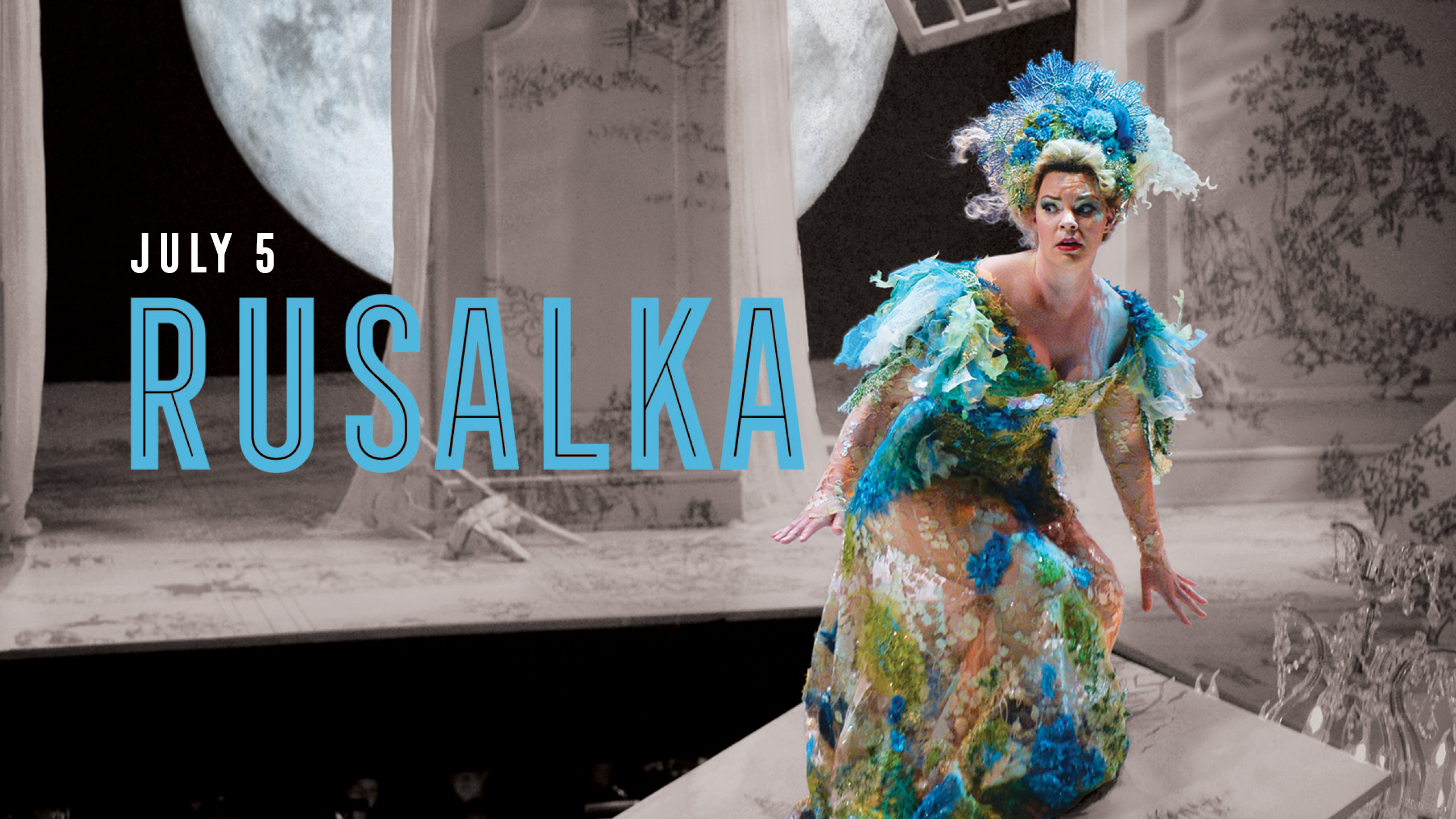 Based on a familiar fairy tale, Rusalka features a beautiful water nymph who falls in love with a human prince and will do anything to escape her enchanted moonlit world to become human. She sacrifices everything to be a part of his life, but her wish comes at a very high price.

Czech composer Antonín Dvo?ák’s deep Iowa connections are well-known following his summer sojourn in the state in 1893. This production marked the Iowa premiere of Dvo?ák’s most well-known staged work. In this broadcast of our 2018 production, soprano Sara Gartland enchants as Rusalka with tenor Evan LeRoy Johnson, mezzo Jill Grove and soprano Laura Wilde making their DMMO debuts as the Prince, Ježibaba and the Foreign Princess, respectively. Bass Zachary James sings the role of the water goblin, Vodník. Maestro David Neely leads the production with direction by Chas Rader-Shieber. Funding for the broadcast of Rusalka has been provided by Frank R. Brownell III. 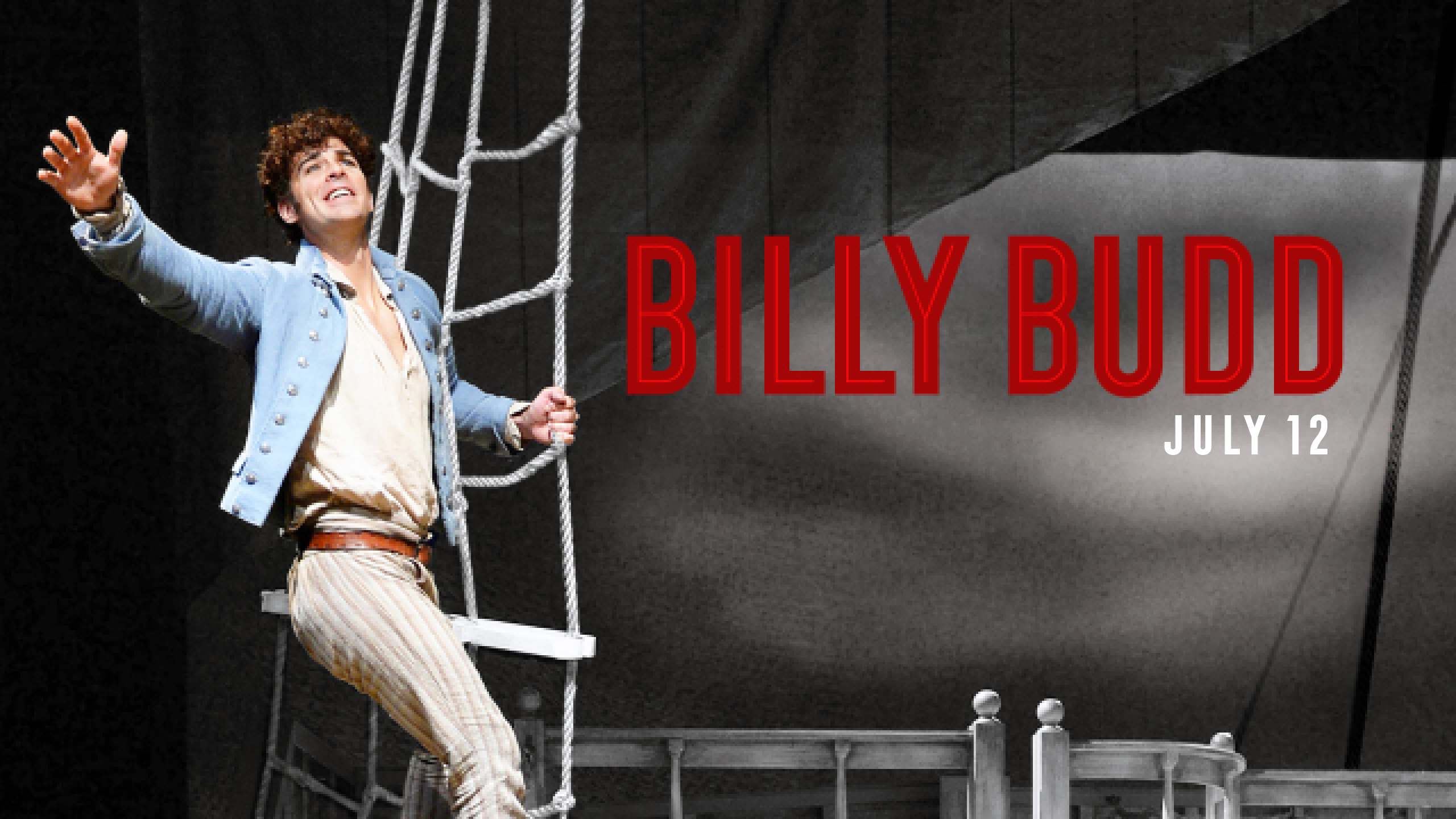 One of opera’s most grandly scaled masterpieces, Benjamin Britten’s Billy Budd tells the story of the persecution and destruction of a young sailor by a predatory master-at-arms. From rollicking sea shanties to bombastic choral episodes, Britten’s searing opera roars to life in a spectacular, new production that transforms a British man o’ war into a crucible for human faith and error.

In this Upper Midwest Emmy-winning broadcast of our acclaimed 2017 production, baritone Craig Verm stars as the young Billy Budd with tenor Roger Honeywell as Captain Vere. Bass Zachary James makes his DMMO debut as the Master-at-Arms, John Claggart. Maestro David Neely leads the production with direction by Kristine McIntyre. Des Moines Metro Opera was proud to present the world premiere of a revised orchestration by Britten associate and scholar Steuart Bedford in cooperation with the Britten-Pears Foundation. Funding for the broadcast of Billy Budd has been provided by the Lauridsen Family Foundation. 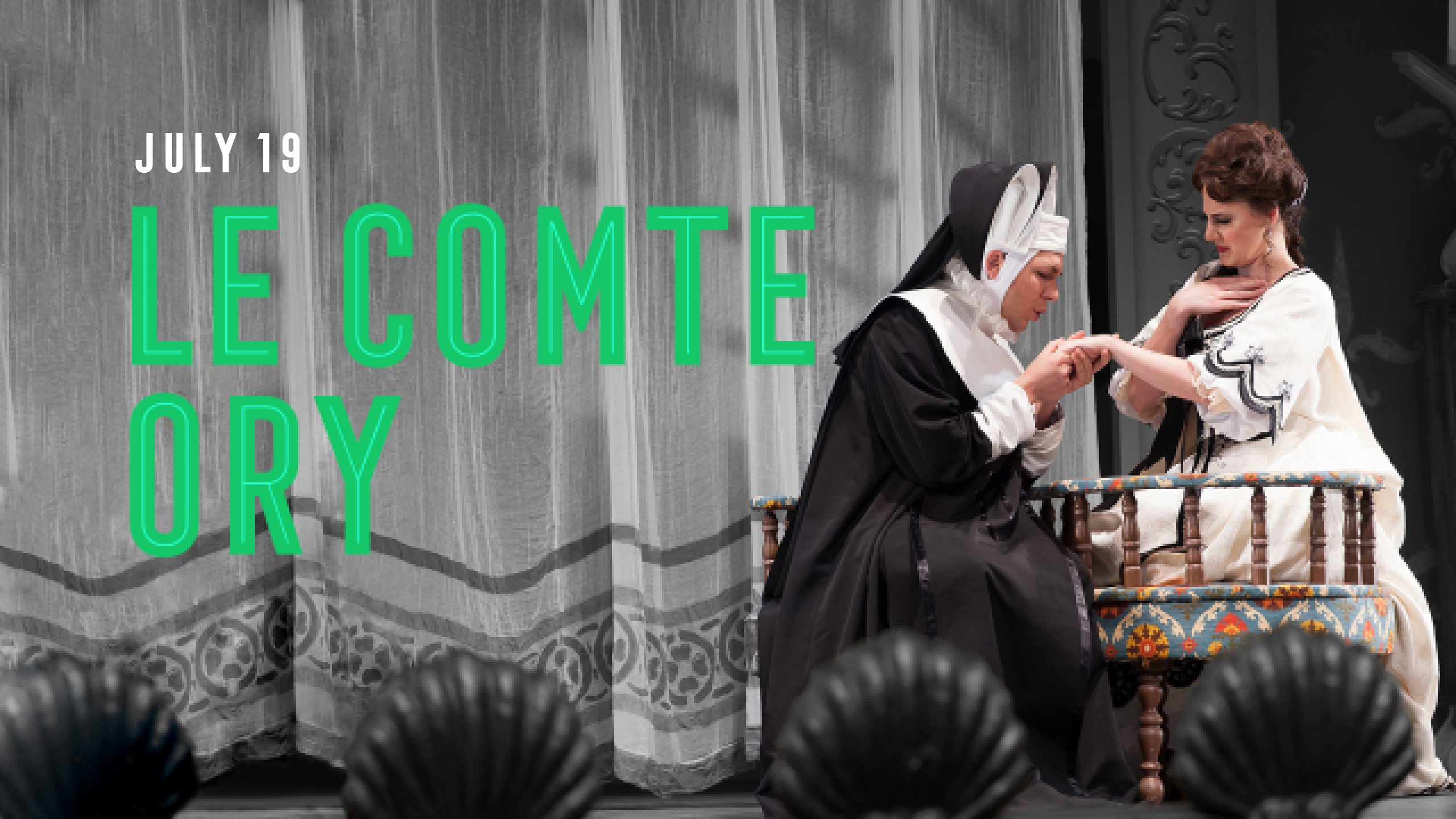 Rossini’s effervescent Le Comte Ory is a comic tale of disguise, seduction, and the victory of virtue. The scene is the French countryside; the time, the Middle Ages during the Crusades. Count Ory, a young nobleman, will do just about anything to conquer the chaste Countess Adèle—but his page Isolier will do even more to win her love. The result is a triangle of intrigue, counter-intrigue, and counter-counter-intrigue that features some of the most gorgeous and vocally dazzling music in the operatic repertoire.

In this broadcast of our delightful 2014 production, tenor Taylor Stayton stars as the young Count Ory with soprano Sydney Mancasola and mezzo Stephanie Lauricella making their DMMO debuts as the Countess Adèle and Isolier, respectively. Baritone Steven LaBrie sings the role of Raimbaud, mezzo Margaret Lattimore sings Ragonde and bass-baritone Wayne Tigges sings the Tutor in this production led by Dean Williamson with direction by David Gately. Funding for the broadcast of Le Comte Ory has been provided by PM Grand LC in honor of Nancy J. Main.

THE COMPANY
Lauded by the Chicago Tribune as “one of the most enterprising summer opera fests in the nation,” Des Moines Metro Opera is a progressive opera company located in the heart of Iowa that has taken its place among America’s leading opera festivals. Founded in 1973, it is one of the largest performing arts organizations in Iowa, annually producing over 100 performances in the metro area and across the region. Last year 94,000 people experienced Des Moines Metro Opera programming via mainstage performances, educational programs and statewide television and radio broadcasts.