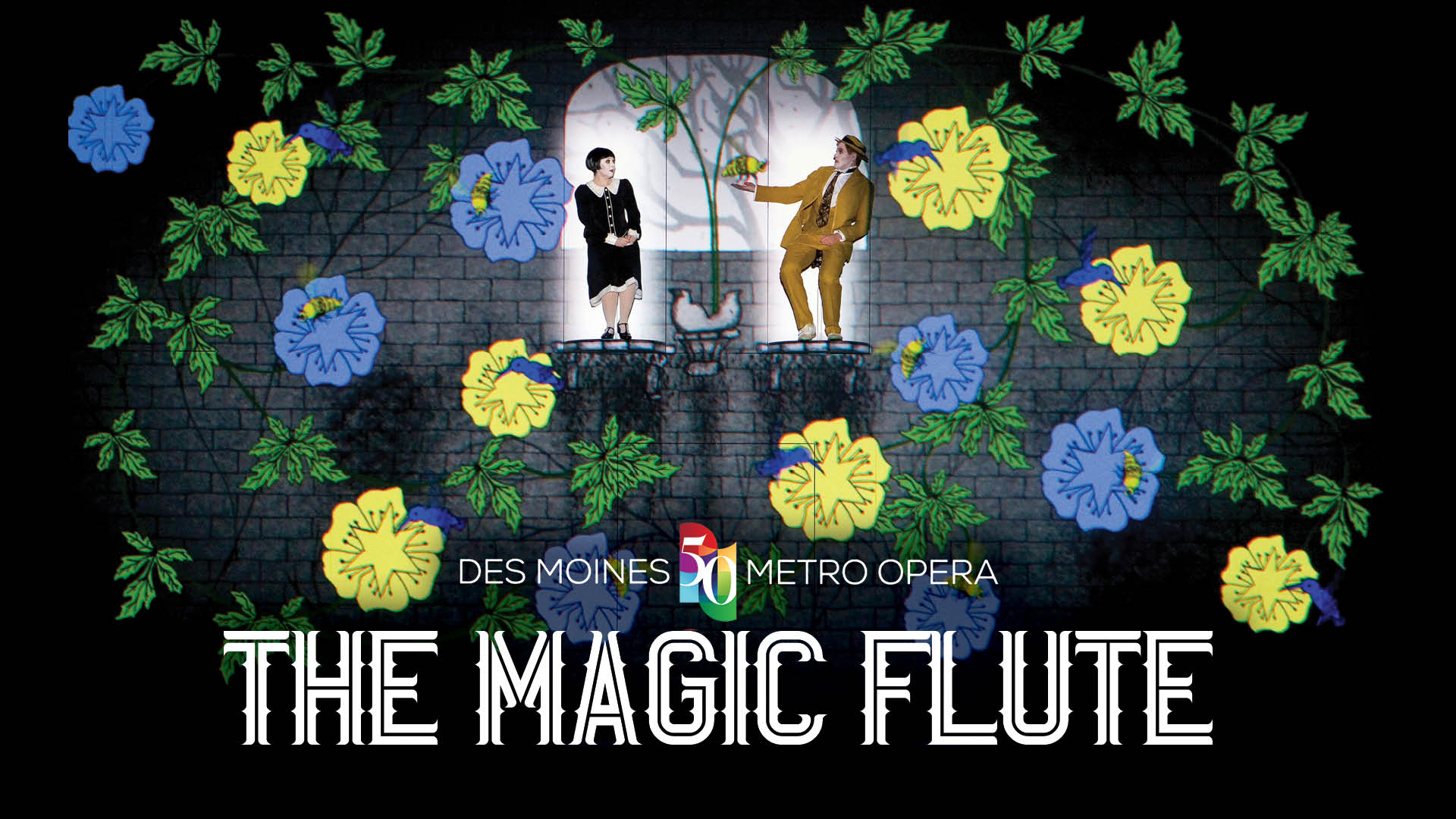 Des Moines, IA (01/26/22) – Des Moines Metro Opera (DMMO) opens its 50th Anniversary Season with a dazzling, technicolor production of Wolfgang Amadeus Mozart’s sublime fairytale, The Magic Flute, on March 5 and 6 at the Des Moines Civic Center. This “surreally enchanting” (LA Weekly) reimagining of Mozart’s final opera pays homage to silent films of the 1920s and features fantastical hand-drawn animations projected onto the set that interact in real time with the singers, creating the impression that gigantic comic strips and cartoons are coming to life before your eyes.

“Prepare to be astonished as we launch the opera’s 50th anniversary celebrations with one of the most remarkable and innovative productions I have ever seen. The ingenious blend of early cinematic styles, fanciful projections and stagecraft wizardry results in a technological and theatrical marvel,” said DMMO General and Artistic Director Michael Egel. “This is not your run-of-the-mill Magic Flute. Our city has never seen anything quite like this.”

The Magic Flute will be presented for two performances on March 5 at 7:30pm and March 6 at 2:00pm at the Des Moines Civic Center. Featuring the musicians of the Des Moines Symphony Orchestra in the pit, this production marks the first ever collaboration between Des Moines Metro Opera and the Des Moines Symphony. Tickets begin at $25 and are available at www.dmmo.org or by calling DMPA’s Box Office at 515-246-2300.

About the Production
First unveiled by the Komische Oper Berlin in 2012, this revolutionary reimagining of Mozart’s masterpiece was brought to life by the minds of Suzanne Andrade and Paul Barritt of the British theater group 1927 and visionary stage director Barrie Kosky. The acclaimed production has since taken the world by storm and has been seen by more than 400,000 in more than two dozen cities on four continents. Des Moines will be only the 8th U.S. city to experience this remarkable production, after New York, Los Angeles, Chicago, Houston, Philadelphia, Cincinnati, and St. Paul.

The Cast
Soprano Raven McMillon and tenor Aaron Blake make their DMMO debuts as the young lovers Pamina and Tamino. After a jaw-dropping debut as the Controller in DMMO’s 2018 production of Dove/De Angelis’ Flight, soprano Audrey Luna returns to portray the mysterious and terrifying Queen of the Night, a role that features one of the most famous arias in all of opera, the high-flying “Der Hölle Rache” (“Hell’s Vengeance”). Additional company debuts include baritone Andrew Wilkowske as the sidekick Papageno, soprano Denis Vélez as Papagena, and bass Christian Zaremba as Sarastro. John Robert Lindsey, tenor, returns to sing Monostatos, and Mathilda Edge, Sun-Ly Pierceand Kathleen Felty make their debuts as the 1st, 2nd, and 3rd Ladies, respectively.

The Creative Team
The Magic Flute will be led by conductor Christopher Allen and staged by Erik Friedman, who serves as the production’s revival stage director. Original stage direction is by Barrie Kosky and Suzanne Andrade. Animation design is by Paul Barritt. The scenery and costumes are designed by Esther Bialis. A production of the Komische Oper Berlin. Co-produced by Los Angeles Opera and Minnesota Opera.

Lauded by the Chicago Tribune as “one of the most enterprising summer opera fests in the nation,” Des Moines Metro Opera is a progressive opera company located in the heart of Iowa that has taken its place among America’s leading opera festivals. Founded in 1973, it is one of the largest performing arts organizations in Iowa, annually producing over 100 performances in the metro area and across the region. Des Moines Metro Opera’s 50th Anniversary Season includes the Iowa premiere of the Komische Oper Berlin’s production of Mozart’s The Magic Flute in early March, and the summer festival includes a new production of Benjamin Britten’s A Midsummer Night’s Dream, the Iowa premiere and new production of The Gershwins’ Porgy and Bess, the world premiere of Kuster/Campbell’s A Thousand Acres, and the live performance premiere of Geter/Palmer’s American Apollo.